Jesse Ventura Net Worth: Jesse Ventura is an American actor, author and politician who has a net worth of $6 million dollars. Born James George Janos in Minneapolis, Minnesota, in 1951, into a family of World War II veterans, Jesse Ventura joined the U.S. Navy in 1969 and served during the Vietnam War era until 1975. When he returned home, he worked as a bodyguard for The Rolling Stones, then adopted the name “Jesse “The Body” Ventura” when he became a professional wrestler. Ventura wrestled for more than a decade and appeared in several anti-steroid educational campaigns following his retirement and admitted steroid use. He retired from wrestling in the ring after suffering from blood clots, which he claimed was due to exposure to Agent Orange in Vietnam. Ventura began doing TV commentary after his retirement. He is a one-time American Wrestling Association World Tag Team champion and was inducted into the WWE Hall of Fame in 2004. Ventura’s acting career began when he appeared with Arnold Schwarzenegger in “Predator” in 1987 and on several episodes of “Zorro” around the same time. Other TV and film credits include “The Running Man”, “Ricochet”, “Demolition Man”, “Batman & Robin” and “The Master of Disguise”. He launched his own TV show, now titled “Jesse Ventura: Off the Grid” on Ora TV in early 2014.

Jesse Ventura's net worth, salary and other interesting facts:

My position is that it isn't government's job to mandate patriotism. To me, mandating a pledge of allegiance to a government is something Saddam Hussein would do. 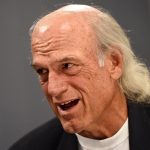 The SuperPACs and the Citizens United ruling that gives corporations a voice in the political process are all bad news. They made it so you can now lie, and the politician being promoted on that lie will not be held responsible for it.

Wrestling is ballet with violence.

Students often approached me about state-paid tuition while I was out campaigning. After I explained to them that if the state pays their tuition now, they will pay higher taxes to pay other people's tuition for the rest of their lives, most of them ended up agreeing with me.

I could never be a career politician, because I believe in telling the truth.